Had to learn to spell this word to make it my word of the year.  (Learning something goes along with the family word, so I’m okay with that).

My first word for a year was Proactive, and it was such a success that I thought I’d revisit a portion of the concept this year with Initiate.

I envision this word reminding me not to just think and dream, but to do.  Start the things I want to do.  I find that I’ll think of an idea and then freeze.  Maybe I wonder around the house, look at the items needed to implement the job, and not do anything.  Sometimes I do that so long I forget the idea and nothing ever happens.

This happens with my interactions with people too.  I get shy and don’t mention, invite or comment, and the conversation never happens. I need to initiate the contact, conversation, interaction rather than wish I had.

The dictionary says that initiate means “to cause  or facilitate the beginning of” – yep, that is what I want to do.  I can’t necessarily control the out come, but I can get it started.

This year I want to initiate the ideas.  Who knows, maybe the implementation will take a different direction that I originally thought, but it will go somewhere.

My first act of initiating?  Well, these photos sprinkled throughout this post.

See the first two I took way back when we had the cold snap here at the beginning of December.  They are photos of ice dams that formed on the Gallatin River and some of the results.  I heard about the issue on the news and drove over there one morning on my way into town just to check it out.  What was significant was that these photos are all of the property of my brother’s former boss – and I would say his friend.  The building was where my brother worked many days (before the shop got moved to a new location).  Anyway, my thought at the time was “I should post these on the blog because I’m sure Daniel would be interested to know what was happening to Russ and Lorie’s property.  But I never did anything. 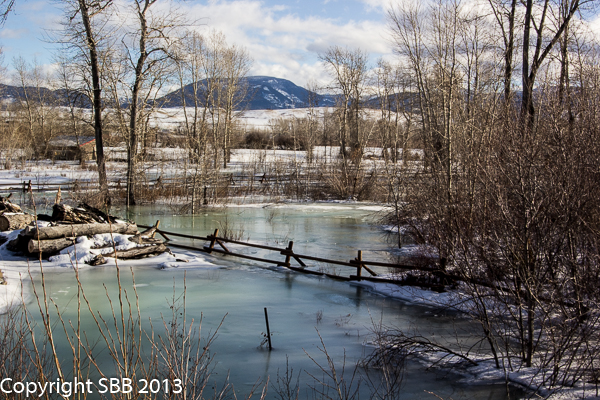 Today Andy and I were back over that way for a little walk and I took the rest of the photos in this post.  I was shocked to see that the ice dams have not cleared, that part of the river is still clogged, and the water is flowing on Russ and Lorie’s property as well as on many of their neighbor’s properties.   While there is a beauty to the river, and it looks like Russ and Lorie’s actual house is still livable, the damage to property is stunning, and still in progress.  (Daniel helped to do a major remodel on that house and if it flooded it would be ruining some of his handiwork as well as really harming our friends and their family). 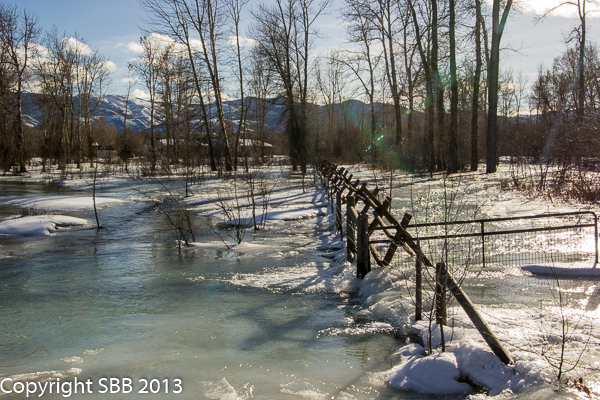 So, Daniel, these shots are for you, and I am initiating (better late than never) showing them to you by posting them here on my blog.  An idea delayed, but not forgotten!   I haven’t spoken to Russ or Lorie, but it appears their house itself stayed dry and is being lived in through this mess.

That is what I’m hoping for with this word.