My beautiful chickens have been so fun this past year!

They are still fun, but now the Americanas are molting and just aren’t as beautiful as they once were.  The Rhode Island Reds aren’t molting yet, so they are still beautiful. 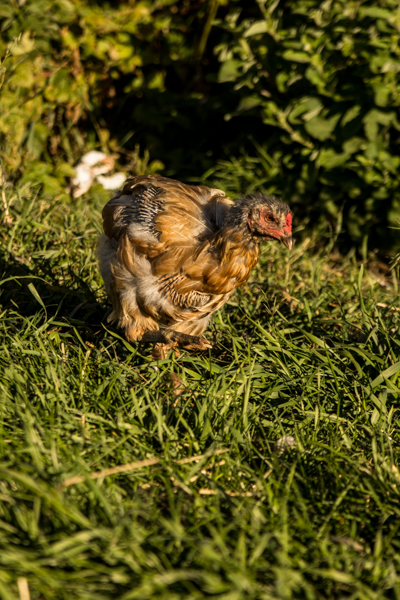 Poor little girls!  Poor us, because when the molt, well, they don’t lay eggs!  We really miss their beautiful blue green eggs!

When not molting they are very reliable layers, more than carrying their weight in the production business.

These photos are from a couple of weeks ago, so they are starting to look a bit better.

But then I fully expect all 6 Rhode Island Reds to molt at the same time, and we’ll be missing the brown eggs.

After an absence from the blog I always want to explain – but really it is just a matter of living life.  We are getting ready for a huge three-week long trial that starts in just over a month – definitely the longest trial of Andy’s career so far, and as far as moving parts, one of the most complicated cases.  It is a white-collar crime allegation so there are documents upon documents upon documents in the case.  A huge time suck!

At the same time my not particularly inclined to handy-man work husband built a home for 12 chickens, who joined us on Sunday of this week.  These beauties are J’s project – he hopes to sell their eggs once they get settled and start producing.  Yesterday they came out of the coop for the first time as far as we can tell.  That was exciting because we were worried that they weren’t coming out even after the wind and snow of the early part of the week went away.    I think they just like it nice and warm, and yesterday afternoon they got that.

These two (above and below) keep us busy too.  Above is Arnica – a girl – and below is Arison – a boy.  They are 3.5 weeks old, and all these photos were taken last night as they ventured out of their nest for the first time – much to Sophie’s (momma) displeasure.

They seem to enjoy the dogs at this point – and the dogs are pretty excited but gentle about the kittens! 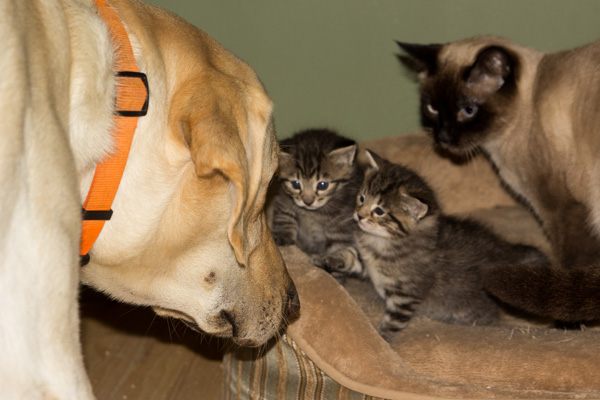 Even blind Leo finally found them with his nose last night, and he just wants to curl up with them. 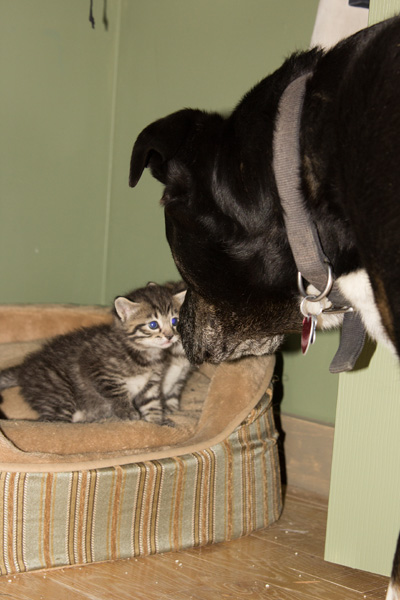 When they decided to leave the nest they did it together, and were greeted by Mr. Tank, who knew they weren’t supposed to be wandering along.

Aren’t they the cutest!

So, that doesn’t explain every little detail of life for sure, but lets you know we are alive and well, just buried in work and trying to keep the balance of good things in life – and the animals are a part of the good things!

Oh, and J finished up his first quarter of 8th grade with his best ever grades and he made that accomplishment without interference from his parents – he’s very independent with his school work these days and really quite responsible.  We couldn’t be more excited about this development because of the growth and emotional peace it brings to J who has always worked hard but until we figured some things out this summer never got the reward for his efforts.  Now he’s getting to experience some of that, which is such a joy – it almost brings me to tears.

We got a big snow storm yesterday and last night.  J was giddy the whole way home from school because he loves snow.  We actually got home before dark (a rarity these days) and as I was baking some bread I notices this little guy out in the sunflowers by the living room window.  So, I tried to sneak up on him with the camera and get a few shots through the dirty window.  For the first time ever it worked – he didn’t fly away as I approached the window.

I think he was tired because in many of the shots his eyes are closed.

J continues to have a really good year at school, which thrills all of us – and reduces stress.  I guess a bit of maturity and growing goes a long way to finding how to organize things.  Makes all the difference in the world.  Eighth grade is wonderful! 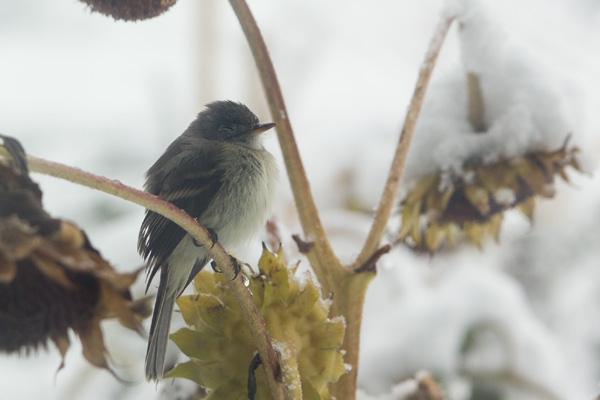 Andy remains extremely busy – has a big hearing on Monday in a giant Ponzi scheme case.  If he wins his motions the chances are pretty good the case will go away.  He’s worked many many hours on this case and may spend many more on it.

I’m working hard for Andy – more focus on his cases, less free time for blogging and photo processing when I’m at the office.  I’m also finishing up processing wedding photos and have a back log of photo-shoots I’m working on, so I’m also busy busy busy.  But I have to tell you, a back-log of photos to process is much better than being busy with a Ponzi scheme case.

This photo is from this morning as the storm was moving out.  By now most of the snow is probably melted – it certainly is here in town.  Love that you can see the glow of sunrise off in the distance once the dark clouds end.

Other updates:  Sophie should have kittens soon – hopefully they are healthy and alive this time.  Leo still blind, and if at all possible, even more so.  But still wags his tail and seems happy.  Tank . . .  well, he’s just a tank of love and excitement all the time.  And our chicken coop is part-way done, with chickens being held by a friend for when we are ready.  J is already planning on adding ducks in the spring, and goats as soon as he can.  It is a full life we live, that is for sure.