Monday brought a call from my friend Eva asking if I would do a mad dash with her down to Salt Lake City (about 7 hours each direction in good road conditions) to pick up some items from Ikea for decorating her husband’s new business.  Sounded like a fun adventure to me, and after clearing it with the boys, I was off early Tuesday morning. 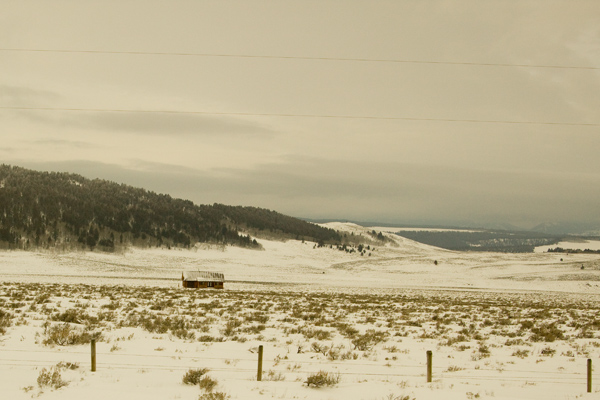 I rode shot-gun and took these photos out the window as we whizzed down the icy highway – meaning it was a more than 7 hour drive.

It was also a longer than usual trip because a little someone in the back of the cab needed to stop and eat ever 4 hour or so – plus, we just wanted to love on her.

She was a good little traveler!

No sooner had I taken the wheel for the first time then I got a call from J:  Momma, I’m sick and need to leave school.  Andy was in court, and all my “back up people” were not reachable.  So, lots of calling to the school, explaining the situation and waiting to find a solution – Andy got out of court and went to get him.  The first travel drama conquered!

We filled that truck at Ikea – didn’t want to have to rent a U-Haul if we could help it because that would just slow us down, and we were bound and determined to get home for Bible Study on Wednesday evening – but whoops, we were already about 5 hours behind on that schedule.

Re-adjust!  We were bound and determined to get home by mid-night or 1 a.m. since it took about 5 hours longer than we thought in Ikea.

By the way, for those who are interested, we got a total of 6 regular carts full of market place items, and two trolley carts of put-it-together-yourself furniture in our Tuesday night to Wednesday shopping.  And with all that stuff, Ikea would not open one of their full-service lanes.  We had to self check both times we went through, even though we asked if it was possible for help and we were indeed spending thousands of dollars.  I was generally not impressed with the customer service during our shopping experience, and this took the cake.  But anyway, enough about that.

Little miss was packed in there in her special car seat spot and we were ready to hit the road, just 33 hours after we left home.  Not too bad for all that we accomplished. 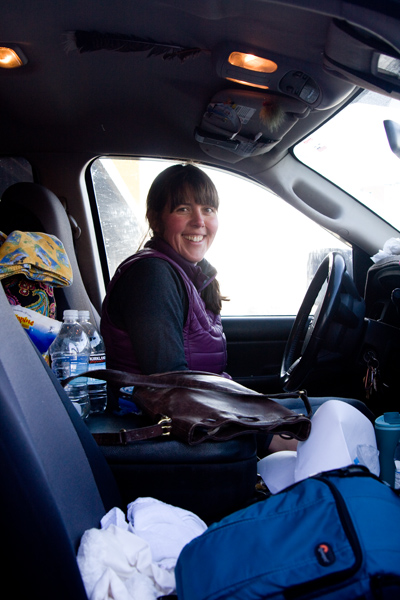 We stopped at a grocery store to get dinner, and that’s when it hit – lower GI bug for Eva.  So, it became apparent we would be making lots of stops along the way.

Side note:  This happened to Andy once when he was driving with my cousin-in-law Jeremy from Wyoming to California, and significantly lengthened their trip as well.

Back to our story here – as we were rushing from gas station bathroom to gas station bathroom in a northerly direction, we hit a bank of fog that was about as bad as I’ve ever seen.  Since I grew up driving across the central valley of California to see relatives as regularly as I could I know my fog banks, and this was a doozie!

For 1.5 hours (with only one bathroom stop available), we trudged slowly through the dense fog.  Visability was literally only two dashed lines on the interstate – then everything disappeared completely.  We popped out of the fog just south of Pocatello ID, realizing that between the sick stomach, the intense driving experience, the delays we had already experienced self-checking at Ikea, and anticipated icy roads (see top photo) we were not going to get any further north than Idaho Falls.

Sickness remained with Eva through the night and into our four-hour drive home the next day, but we made it home safe and sound, mission accomplished.

And that is why I have not blogged yet this week.  Lots more to share, but will have to wait until the weekend or next week – I’ve got some catchin’ up to do around home and office!